I did not grow up in a family that sat at the table and ate dinner together daily. I don’t know that there was any particular reason; it just wasn’t something that we did. And yet we are still very close with only the same reasonable level of dysfunction as any other family. So I’ll be the first to say that your family is not doomed if this is a ritual that you don’t follow. But for as long as I can remember, maybe because we didn’t do it growing up, I knew that it was something that I wanted to implement in my own household one day. So when I got my own family, that’s just what I did.

We’ve been eating together at the table every single night since the day we brought Lila home. Before we knew it, Matthew had joined us. They’ve been there every day, watching and listening as we converse with one another, joining in and responding with their baby babble. Just as soon as she began speaking words, we began asking Lila pointed questions about her day, guided by the teacher’s notes on her daily sheet. Matthew was much more slow to talk, to the point that we were even concerned enough to ask our pediatrician about it. Our logic assumed that he would be just as quick as he had an older sibling to emulate. But the Dr pointed out that sometimes it’s actually quite the opposite as Lila was doing all his talking for him, and indeed she was, always telling us what Matthew “said” and what he “needed”.

But, seemingly overnight, he found his voice, and then apparently decided to make up for lost time by talking more than anyone at the dinner table. When he gets the all clear that dinner is ready, he yells that the TV has to be turned off and then he personally approaches everyone in the household and informs them that it is time to join the table. We frequently have extended family members over on any given night and he insists that they join as well, whether they want to or not, whether they are hungry or not. Should someone say that they are not hungry or they already ate, his response is, “So? You still have to sit at the table.” He will also (loudly) inform the teenage cousins that at the table there are “no phones and no games!” which he apparently came up with on his own as it’s not like we’ve ever had to personally issue a “no phone” order to him.

Once everyone is seated, he then selects someone and addresses them directly to share the details of their day. It generally goes something like this:

Matthew: Mommy, how was your day?

Me: I had a good day today, thank you for asking

Matthew: What did you do?

Me: I talked to lots of people today and helped them get where they needed to go

Matthew: Did you miss me?

Me: Of course, very much

Matthew: And that’s it?

Satisfied, he’ll turn to the next person and begin the process again. No one else can moderate, he is the only one that can call on someone to share. And we all must adhere to his prescribed order (usually clockwise); no one can speak out of turn or is allowed to interrupt. It’s not enough to just say that your day was good or bad. He will press you for details and then he even asks follow-up questions, asking things such as “Mommy, were you tired today? Did you have a meeting today, Daddy? Lila, what centers did you visit today?” And to everyone he will ask for a recap of what one had for lunch. He always graciously waits his turn to share until the end, and then serves his final reminder to everyone that “You have to say ‘may i be “scused”‘ and you must wipe your hands!”

I’m not sure why, that at all of 3 years old and the littlest one in the house, he’s taken on the role of ensuring our nightly dinners run smoothly as no one has ever actually asked him to do this. But he takes it very seriously, and therefore, so do we.  I don’t think there’s a single night so far that we’ve all been together that we haven’t eaten together, and I hope that it stays that way. I know it’s so much easier to do this kind of thing when they’re young, and that one day they will be busy, brooding teenagers that will think Hubs and I don’t know anything whatsoever, but we plan to stand firm that eating dinner together is nonnegotiable. The studies that show doing so results in healthier kids that are less likely to drink or do drugs and are more likely to delay sex, among a plethora of other benefits, are certainly appealing, but I know this is no guarantee of avoiding such ills. Even if there are no such benefits whatsoever to be gained, it is still a reassuring and welcome respite of the day in which I can gaze at the faces of those I love all at once. And who knows, we may even be nurturing the next great moderator of the presidential debates right here at our very own family dinner round table. 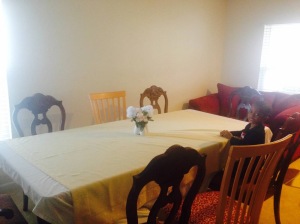 Always the first at the table…

…and the last to leave!

7 thoughts on “The Family Dinner Round Table”