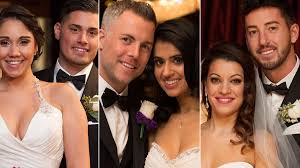 Well that went downhill quickly! After finally catching up on all episodes of Married At First Sight Season 2, I’m surprised ( and yet, not so surprised) to learn that 0 for 3 couples have remained together. And that not only did they merely separate, but some of them ended badly. I’m a few weeks behind in learning this because, although I watched this season, I was often behind and did not rabidly devour as I did the first season. Something about this season never felt exactly right to me. I never felt the chemistry between any of these couples, not even in the beginning when they were decidedly more invested and into one another. Even when viewing intimate displays of affection between the couples, something just always seemed off to me, although I could never quite put my finger on it.

I don’t want to question the sincerity of the participants, and I didn’t really get the feeling that they just wanted fame or to further careers (hopefully the future will still prove this to be true as I’d like to continue to believe in the good of people) but I still have to wonder if they all really thought it through, like really. Some red flags are Sean admitting during the reunion that he watched the first season and basically thought “Hey, why not”. But maybe some of the “why not” reasons should have included the fact that through his own admission, he was still reeling from the loss of a partner’s miscarriage not even 9 months earlier, not to mention the fact that he didn’t really seem to want to move (or couldn’t move for legal reasons?) And then to learn that they only spent a total of ten whole days together? Ten days?? I was floored at this acknowledgement. Well no wonder it didn’t work out then! 10 days does not a marriage make. With all that he seemingly had going on, this clearly wasn’t the best time in life for him to sign up for this, and if any of these allegations are true and he was not truly honest with Davina, then he was completely wrong for forging ahead. This would make it all the more clear and understandable why Davina seemed completely unconvinced and unaccepting of his apologies during the reunion. That said, while Davina was justified in her feelings, she too seemed to have some ongoing issues that made the viewer wonder why she would have ever signed up, either. She came across as overly self-centered, always only speaking of what she needed in a relationship and what was/wasnt being done for her. That she became so bent out of shape on like Day 2 when Sean didn’t correctly read her mind about what she needed at that exact moment gave the impression that she has rather unrealistic expectations of mere humans period, much less of a husband. If anything, I felt rather sad for her when on the very first show she shared how she was ridiculed and bullied because of her culture and background and now refused to date anyone other white men. While a person is certainly entitled to their own personal preferences in dating, her staunch refusal came across more as a little bit of cultural self-loathing and insecurity as opposed to just a preferred physical attraction, and that’s just sad.

And then there was Ryan D, with his borderline unhealthy desire to replicate his grandparents marriage, which by his own account was a seemingly badgering and volatile relationship. I’m glad his grandparents sustained such a long marriage but does he really know how his grandmother truly felt about being on the receiving end of that kind of treatment? She was from a different time when wives did things differently. I don’t wish to insinuate at all that she was unhappy in her marriage; I truly hope that she wasn’t, but it nonetheless baffles me why Ryan D. would think that type of treatment would be reasonably accepted or tolerated by any other woman. The only impression I ever really got from Jessica was that she still seemed to be suffering from her previous years-long abusive relationship and that maybe signing up for this was more an attempt to try to move on rather than her actually being 100% already over it and ready to do so. With Ryan D’s explosive and abusive outbursts, I can understand that she was hurt, but throwing money at him during the reunion was an undignified move and I wish she hadn’t stooped to that. Although that still fails to compare to recent developments such as the current restraining order and alleged drug use. I don’t even really know what to say to any of that, other than I hope it works itself out for all involved.

Although I didn’t feel the chemistry between Jaclyn and Ryan R. either, I did have the most hope for them. I appreciated seeing the change in Jaclyn and how she completely opened herself up to him, which is all that he seemed to be requesting in the first few episodes. So when she finally lets her guard down, it was very confusing why he seemed to immediately pull back. Was it that she was too intense and too outgoing for him? In which case, did he bother asking for a more reserved, introverted match? Or was it that he felt emasculated when she would take charge, ordering for him and insisting on paying? Did he feel inadequate that she owned her own home when he still lived in his mother’s basement? It’s not as if he were just your typical, unambitious slacker; with his family’s story, no one could blame him for wanting to remain close to home, but then why didn’t he just say that during his vetting? Why claim you are open to moving and starting a new life when clearly you aren’t? In all 3 cases, it’s as if it all boils down to once again, did you really take the time to think this through and be completely honest with yourself about what you wanted, as well as what you were ready to give? It seems they all had this ridiculous notion (and all said as much) of wanting a fairy tale ending and of being swept off your feet like in the movies, but it just doesn’t work that way. If anything, I would say simply by virtue of being on the show, they should have prepared for more stress and hard work than even the typical relationship as theirs was such an unusual situation. If you go into this thinking “Whats the harm, if it doesn’t work in 6 weeks then I’ll just divorce”, then maybe this experiment isn’t for you. Real marriage, dedication, and commitment is not about saying “if it doesn’t work out” but rather about recognizing when to work harder.

If there is any truth, however, to these persistent and rampant rumors, then you have to wonder how much the odds were really stacked against these couples anyway. Maybe that “off” feeling I had about them all from the beginning was due to the show’s own admission that season 2 was cast much quicker (weeks instead of over the course of a year as did the first season) and from a broader pool (producers sought out online instead of genuine applicants). That would certainly explain why Season 1’s couples were more successful. I still like the premise of the show. Even with the disaster that was Season 2, I still find it interesting to watch the navigation of other relationships and marriages in comparison to my own. And watching with my husband has fostered important discussions between us that have only furthered our love, appreciation, and understanding of one another. With the expansion of this show growing from 1,000 to 20,000 applicants, my concern that it may be losing its original pure authenticity and turning into a mere reality show now seems more of a…reality. It wouldn’t surprise me at all that executives and producers would cut corners and tweak matches and story lines for ratings, but I still feel a genuine credibility from the four experts and would hope that they wouldn’t compromise the integrity of their given professions by continuing to participate in the show if it were truly becoming a sham. As with any relationship, I suppose only time will tell.