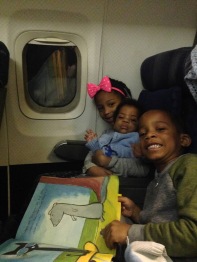 I cannot tell you how relieved I am at how much my kids have so far proven to be fantastic fliers. We tend to take early morning flights that have them getting out of bed in the wee hours of the morning, but even with not being well-rested, they stay close and follow instruction to the letter when going through security, rushing through connecting airports, and during the hustle and bustle of boarding and deplaning. They truly roll with the punches and have handled curveballs better than some traveling adults we’ve witnessed in the airport.

Lila’s first flight was when she was 9 months old. I don’t necessarily remember being nervous about it, but it was only too obvious that other people were! We were running late, the last to board just moments before the door closed, and I could literally sense the dread the passengers felt as we moved closer to their adjacent empty seats. But to their relief, (and most definitely to ours!)  she was a piece of cake the entire flight. She happily played and squealed in our laps, drank some milk, and then took a little nap. I was so tickled and appreciative when at the end of the flight our neighbors actually took the time to comment to us on how good she had been. 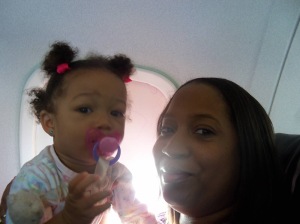 She has taken several more flights with only me through the years, some when she was only two and three years old, and all of which included late nights, layovers and delays, and long walks from gate to gate. She was a trooper each time; even when it was clear she was getting tired and restless, she just never completely fell apart on me.

Matthew’s first flight was not until he was two years old, and that experience, too, went off without a hitch. He was super excited and asked a million questions but he wasn’t nervous or scared at all. In the airport he stayed close and followed directions and once on board, he looked out from his window seat, ate his snacks, and flipped through a magazine. 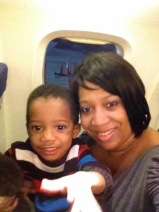 With our most recent family trip, I was very nervous to now be outnumbered traveling with a third child. I can only imagine what a sight we must have been coming through the airport with a Kindergartener, a preschooler, an infant, a car seat, a stroller, a diaper bag and 8 carry-ons! Simply getting down the tight aisles of the plane proved to be the hardest part. If I had been any other passenger, I’m sure I would have shuddered in fear as well seeing that coming my way. But once again, the children came through for us! Well actually, they most certainly worried me with their incessant questions, never-ending requests for snacks and games, and squabbling over elbow room and window views. But I’m thankful that they only quietly bothered me instead of being a nuisance to our neighbors. Once again, we had neighbors from both flights stop us afterwards to remark on how well-behaved they were.

And even though I had been a little more scared about flying with such a small infant, he also turned out to be a dream. He sat, he looked around, he nursed, he slept. I flew with him again about a month later and it was all more of the same.

And what a relief that was, because even I, a mother that knows what it’s like to travel with young children, still finds crying babies on a plane to be annoying! Crying is not meant to be a pleasant sound; it is grating to the nerves and that’s why most parents do all they can to stop it, on a plane or otherwise. Infants, however, can sometimes be absolutely inconsolable. And in those cases, as annoying as their crying may be, I am also completely empathetic. But when the kid is a  bit older, ehh,  not so much!

I have yet to fly with a child at that precarious stage between the ages of one and two, but I’m aware that this is a potentially more challenging and troublesome age to fly. Baby is much more vocal and mobile but doesn’t yet have the ability to regulate his actions or control his emotions. On a recent flight, we sat across from a family of three that included a 4-year old and a 1-year old lap infant. Both were extremely fussy, crying and whining the entire 2 hours from takeoff to landing. The 4-year-old went much further with seat-kicking, continually shrieking at the top of her lungs for candy and her mom’s iPad, and repeatedly yelling at her parents that no, she would not whenever they timidly pleaded with her to do/stop doing something. I was much more sympathetic to the 1 year old’s plight: she was teething and it was clear the cabin pressure bothered her. Plus, she was one. There’s just not much reasoning you can do with a child at that age. But as for the 4-year-old… lets just say that I’ve traveled with both Lila and Matthew when they weren’t quite 3, still well within the toddler and tantrum stage, but even at that age, I made it crystal clear what behavior I expected from them. And I also took pains to make sure they were not a horrible distraction to other passengers. With babies, there’s just not much that you can do, but I firmly believe that as a parent, it’s my job to curb and cease annoying behaviors in older children.

For several days before traveling, we went over and over practicing how we would sit on a plane and the things it would and would not be ok to do. And even with that, I know it’s much easier said than done.  I acknowledge that no matter how hard a parent may try, regardless how much you practice drills, despite having goodie bags filled with snacks, toys, and activities, sometimes a child will still act up and act out. I’ve been fortunate enough to have so far only had good experiences, but I am well aware of the possibility that one day I may board a plane with my children and they may completely take leave of their senses. All I can say is that when that happens, I promise not to be one of those parents that seems to just sit back  and do nothing. And I’ve definitely seen those, the ones that turn a blind eye and deaf ear and pretend nothing is happening.  I don’t know, maybe they’re embarrassed and/or maybe they truly just don’t know what to do. To that may I suggest try something. Anything. At least hearing you firmly and authoritatively tell your child to quiet down or stop kicking seats goes a long way, even if they don’t listen. When it’s my kids’ turn to be horrors, I promise that I will do the same. 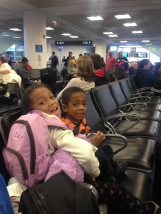 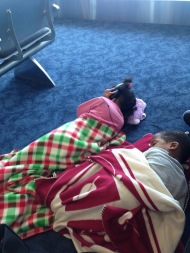 What I likely won’t do is follow the recent trend of buying drinks for surrounding passengers or handing out  “sorry in advance” care packages with earplugs and candy. I suppose it’s a nice gesture, and there’s certainly nothing wrong with being thoughtful, but to me it just seems a bit extra and unnecessary. I have enough of a job packing over 12 bags for ourselves to now also be stuffing gift bags for numerous adults. And I also take a little umbrage with the notion of parents feeling like they need to apologize right off the bat just for stepping on the plane with kids. They have just as much right to be on as the grumpy businessman in the next seat over. So no, I’m not “apologizing” for traveling with them. But what I will do is assume all responsibility for my child’s behavior and I will go above and beyond to ensure that they cause as little disruption to others as possible. As long as a parent can truly say that’s what they’ve done, then any surly passenger with a problem that there are kids on the plane can either buy a private jet or do us all a favor and just be quiet and get over themselves.

I’ve yet to encounter, though, anyone being outright rude simply because I’m traveling with children. There have, in fact, been many passengers that were really great to us. On occasion we’ve chosen to fly standby to allow for flexibility with our travel plans, and sometimes the downside to that is that you aren’t able to get all of your seats together. I would certainly not let a 2-year-old sit by themselves, but there have been times I was traveling with my 6-year-old and the seat she was assigned was in the row in front of, beside, or diagonal from me. The 2 or 3 times this has happened with Lila, I was prepared for and ok with it, and she was too, already buckled in and happily coloring when our seatmates ended up offering to rearrange themselves, even taking the dreaded middle seat so that we could be together. I would never expect or even ask anyone to move seats, so it was very much appreciated when they did!

On just our most recent flight, our seats were separated again, with Matthew (age 4) getting the center seat across the aisle from me. Many 4 year olds may not have been ok with this (or their parents) but as I’ve said, they are great with rolling with the punches and they can be quite independent and self-sufficient at times, enough so to be able to sit directly across from Mommy and know how to behave and not be scared. And that’s exactly what he did, taking his seat without complaint or fuss. The two gentlemen he was between actually apologized to me for not switching as they were both very tall and the center seat would clearly have been uncomfortable for them for such a long flight. Those men had paid extra for their seat assignments; they owed me no explanation or apology whatsoever! And they certainly didn’t have to help my son with his seat belt, or take turns assisting him with opening his snacks, or even letting him play with their tablets! (Although I believe Matthew was talking his ear off and the poor guy would have done anything for a few moments of peace!) We had to make several trips to the lavatory for diaper changes and each time, there were nearby passengers that offered to hold the baby for me so I could use it as well. I couldn’t express enough to all of these fellow passengers, these complete strangers, just how much I appreciated their actions. A little kindness and understanding goes a long way in alleviating the stress of the traveling parent.

Call me crazy, but I’m actually looking forward to the next time I get on a plane with these lovebugs. Even with all the chaos that comes with air travel with children, it’s such a joy to feel their excitement over experiencing something different from their everyday. I want them to embrace diversity and be excited about seeing the world. Hopefully coming soon: their first trip abroad!