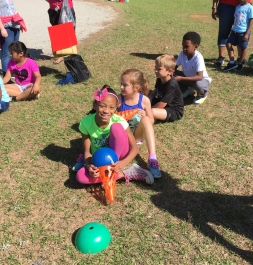 Who remembers Field Day?! I always looked forward to this day in elementary school as one of the highlights (if not the single best day) of the entire school year. An entire day of limited (or none at all!) formal instruction that was instead filled with games, prizes, picnic lunches, Popsicles, music, the works. It was also a competition, with ribbons for only the three top-scoring kids in individual events and shared trophies for team events. Even for the un-athletic and completely uninspired (ahem, me) it was not a day to dread, but still a day of merriment for all. There were plenty of activities that required less athleticism and rigor but were still popular and fun (potato-sack racing, egg-drop relay, etc). And it was always a treat to get to hang around outside not only with the kids from your room but also with the friends you had from other classes and grade levels. It was a full day of sportsmanship and fellowship among the entire student body with (seemingly) no other objective than simply to be a kid and have fun. And have fun we did.

So when my oldest child started school a few years ago and I received my first parent notification announcing the upcoming event, I “aww”-ed in fond memory that this mainstay was still around. But while the Husband has been able to volunteer every year thus far, this year was my first time joining in on the field and festivities. And all I can say is: it’s not quite the same as I remember it! To begin with, it’s now only a halfday event (to be precise, only about 2.5 hours!) in which the K-2 classes descend on the field in the morning and grades 3-5 get their turn after lunch. When not on the field, it’s apparently instruction and business as usual in the classroom. And once on the field, it’s a whole different ball game!

It used to be that we had a number of tournaments set up for a variety of games (be it volleyball, soccer, dodgeball, what-have-you) where your classroom as a whole played together and squared up against opposing classrooms. Who would win the 5th Grade Basketball Tourney, Ms. Brown’s class or Mr. Smith’s class? Trust, it was a Very. Big. Deal with lots of (competitively healthy, age-appropriate) smack-talk and bragging rights for days. Match-ups and eliminations went on all day until one class from each grade level emerged victorious in each game. While you waited for your next class match-up, you participated in the other various activities such as the ever-popular tug-of-war and water balloon toss.

Not so at today’s event.

Today, the kids spent their time rotating through about sixteen different stations, with each stop having a different game or activity. There were still some of the familiar tried-and-true greats and crowd favorites like tug-of-war and relay races, and those all still had a clear focus on teamwork. But a lot of the stations were kind of…random really, and also quite individual in nature. Among the varied activities were solo runs down the basketball court for dribbling and shooting drills, ring tosses (akin to throwing horseshoes) and some new-age creations like pool noodle ball(??) and soccer bowling. Though actually, while I may say that with a scoff, the kids seemed to rather like soccer bowling, where they each had a turn to kick a soccer ball through a set of ten pins gathered in front of a net. The problem was that they unfortunately didn’t get much time to play it at all (or any other game for that matter) as they spent only about 7-8 minutes at each station before the horn sounded to move on. And when it sometimes took 3-4 minutes to first explain and demonstrate the rules before they could even begin to play, well, you get the picture!

And then there was the biggest difference yet: it was all completely non-competitive. There were no individual ribbon winners and no trophy classroom champs. But what’s interesting is that I came away feeling like maybe there should have been! This, coming from a kid that never won anything at field day (unless it was a team win) yet that minute detail never in any way diminished my self-confidence or ability to enjoy the day simply for what it was. What I also noticed: on the events in which we broke them down into small groups for relays, they pretty much turned it into a competition anyway, rooting for their team members, and hugging and cheering wildly when their “team” finished first. All this, when there was never any mention of it being a race, never any motivation to “win” and never any incentive of a reward. It’s as if the urge to compete was self-driven, simply innate. And so I wondered, if so seemingly inevitable, why bother to stand in the way and block it? But while I may question why it was not a day of competition, I will say that I’d much rather there not have been any ribbons and trophies at all rather than for every student to have received one. Those “participation ribbons” or trophies everyone gets just for showing up are (in my opinion) a far worse example and expectation to set. But that’s an eye-roll and gripe for another day. So back to today…

Instead of competition, perhaps the idea was simply to place a greater focus and emphasis on exercise. And if so, I’m not at all against that. We certainly do need to push more for our kids to get outside and move. If anything, that’s all the more reason why it should have been a full-day event! And I’m not even a huge outdoors/sports person at all but today I rolled up my sleeves, threw caution to the wind, and simply had fun with the kids, so much so that even I was disappointed when the final horn blew and Field(Half)Day came to a close. But while the whole station rotation thing was different for me, overall the kids appeared to have enjoyed their time, that’s all that matters! The truncated timeframe was a bit more disappointing, but as the kids happily trudged back to the doors, laughing and shining with sweat, I was pleased to see teachers indeed handing Popsicles out and around. So there’s still that, at least. And as for competition and trophies, the smiles on my kids’ faces over both Dad and Mom taking off work to come out was prize enough for me. In the Playbook of Life, that’s a definite win.